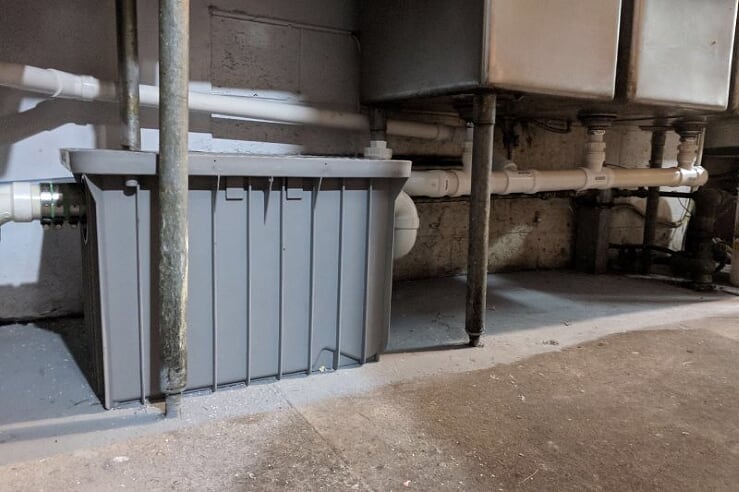 Grease Trap Installation Phoenix – Local health departments invariably mandate the installation of grease traps or grease trap installation as an integral part of any public food serving establishment or kitchen located within their jurisdiction. These grease trapping systems must meet their requirements.

You have probably been thankful from time to time that your grease trap has prevented food waste solids from entering your plumbing system, saving you from hours of downtime due to clogs and other issues. But most importantly, your grease trap protects the public sewer system from the same hazards that you are protecting yourself against. Which is reason enough to have your grease trap pumped out and cleaned on a regular basis!

The law mandates that most of these establishments include the installation of a grease trap in their food preparation area:

● Cafés at places of employment

● At your local church function if serving meals

We can facilitate any new grease trap installation for any of the above mentioned venues. Upon consultation, we can determine the proper size for your needs and budget!

Exactly how big does my grease trap need to be?

Several variables will determine just exactly the size your grease trap needs to be:

It’s not a matter solely of what kind of food, or how many servings you are preparing. The main issue is, what size grease trap do you need after all is said and done. We are more than happy to help you with that.

A grease trap is a grease trap regardless of the size of the system. But there are technical differences between a grease trap and a grease interceptor. As you have probably already surmised, a grease trap is the smaller of the two systems. It is located below your kitchen sink. It’s relatively small enough so that it’s possible to service it yourself, with the proper training and tools.

A grease interceptor is much larger and more intimidating than a simple grease tap. These are underground installations, consisting of chambers comprising many thousands of gallons. Each chamber capable of accommodating a man with the required gear to properly and effectively clear the entire compartment of waste deposits.

Where do we draw the line?

There is a threshold limit at which a grease trap can no longer effectively contain the volume of wastes that a given food processing establishment can produce. The volume of FOGS produced by a commercial food establishment would overwhelm a relatively small 100 gallon grease traps in less than few hours.

While you may need only a simple grease trap, which could take only a few hours to install, you really need a full in-house consultation so that we can properly assess your specific needs. If it turns out that you need a full sized grease interceptor unit, it may take up to a week for the installation, but in the long run it will be worth it. After all- do you want to shut down two or three times per day to pump out your greasy food waste when you can accomplish the same task at the rate of once or twice per year?

Bottom line, you need to ask yourself:

● How much are you really willing to sacrifice for the short termed gain of a small grease trap that needs daily care.

Ok, so what kind of cost am I looking at for a proper grease trap system in phoenix?

Grease Trap Installation Phoenix – There are many variables for us to consider, for example, the size of your food service establishments’ kitchen, number of daily clients served and fat content. In some cases the tank excavation may be located directly adjacent to the kitchen, making installation relatively simple. Or if it more remote, that could increase your installation expense proportionally. But here are some guidelines:

Of course while you should let the size and food production be the governing factor in determining if you need a grease trap or grease interceptor, your budget will be the final factor in all of this. But remember as we said before: do you really want to spend a couple of hours per day, every day, pumping out an undersized and inadequate grease trap, when you could have just settled for a more permanent fix with a slightly higher investment on a grease interceptor?

Whatever size grease trap installation you need, we’ll be your partner!

We have tried to supply as much detailed information as we possibly could, but I’m sure you now have a sense of the great number of facets and variables we must contend with. We are always more than happy to provide you with a mutually beneficial consultation if you wish to call us at your convenience. We are happy to work with you regardless of how big or small the job is, so please give us a ring anytime at 602-223-1937. If you are looking for experts using Google, then just come find us!

The installation of your new grease trap system is only the beginning of a long, fruitful relationship!

GET A GUARANTEED CALL BACK      FROM THE OWNER